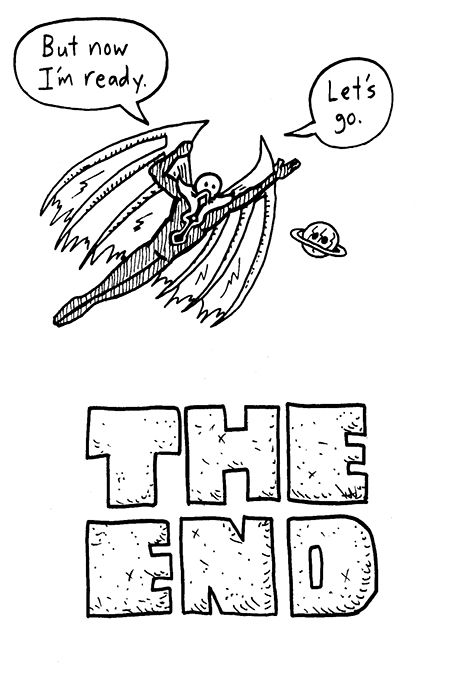 I couldn't remember when I ended Book One, but I looked it up, and apparently it was on July 31st, 2012. Come to think of it, I'd already drawn the ending months before that, but I ditched my old website and started over here. Whatever the case, there wasn't much of a gap, because Book Two began just two days later on August 2nd. Book Two wrapped up a little over nine months later, on May 15, 2013. And then . . . I took a break.

I was burnt out after wrapping up Book Two, and I wanted to focus on my Fuzzball & Scuzzball comic strip. I drew F&S weekly, for years, until it came to an end, and I returned to Laser Brigade a little over three years after I left it. Laser Brigade Book Three began serialization on July 5th, 2016. It's taken over a year and a half, substantially longer than the previous two books.

At the end of Book Two, I said I'd be back soon, and then I was gone for three years. I don't want to make any false promises this time. I know what comes next--Book Four is a collection of short stories, like Book Two was, and then Book Five is the story of the Vortex Guardian gathering the Laser Brigade to aid him against the Arghul. No big surprise there, I set it up pretty explicitly a few pages ago.

But even if I tragically get hit by a bus or something, and never get to make Book Four or Book Five, I think this is a solid ending. I'm happy with it.

So, thanks for reading; I appreciate those of you who followed along and shared your thoughts. I don't know when there's more Laser Brigade coming, so in the meantime check out The Electric Team, the webcomic my daughter Abi and I do with artist Sam Albert, at www.electricteamcomic.com. Thanks again!
Edit Delete